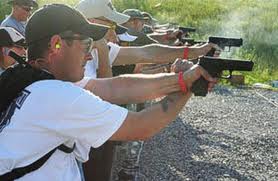 They missed a human sized target 56% of the time at a range of less than 10 feet. I know this wasn't a gun range and hearts were pumping, but come on...


As the two officers confronted a gunman in front of the Empire State Building on a busy Friday morning, they had to make a snap decision: Do they open fire in the middle of Midtown?

From a distance of less than 10 feet, the officers, Craig Matthews and Robert Sinishtaj, answered in unison; one shot nine times and the other seven.

Investigators believe at least 7 of those 16 bullets struck the gunman, said Paul J. Browne, the Police Department’s chief spokesman. But the officers also struck some, if not all, of the nine bystanders who were wounded.