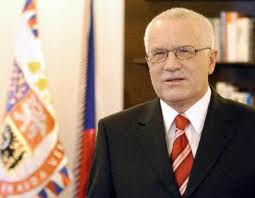 Czech President President Václav Klaus knows what communism is like and has a valid point. It takes draconian state controls and central planning to achieve the kind of greenhouse gas reduction desired by the global warming cabal.


(TNN) — President Václav Klaus has again spoken words of wisdom on global warming. Here is an extract of his speech at the International Seminar on Planetary Emergencies, organized by the World Federation of Scientists in Erice, Sicily on 20 August 2012:

As someone who personally experienced central planning and attempts to organize the whole of society from one place, I feel obliged to warn against the arguments and ambitions of the believers in the global warming doctrine. Their arguments and ambitions are very similar to those we used to live with decades ago under Communism. The arrogance with which the global-warming alarmists and their fellow-travellers in politics and the media present their views is appalling. They want to suppress the market, they want to control the whole of society, they want to dictate prices (directly or indirectly by means of various interventions, including taxes), they want to “use” the market. I agree with Ray Evans that we experience the “Orwellian use of the words ‘market’ and ‘price’ to persuade people to accept a control over their lives”. All the standard economic arguments against such attempts should be repeated. It is our duty to do it.