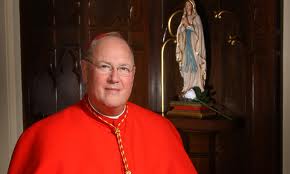 “It was made clear to the Democratic Convention organizers, as it was to the Republicans, that the Cardinal was coming solely as a pastor, only to pray, not to endorse any party, platform, or candidate,” New York archdiocese spokesperson Joseph Zwilling said in an Aug. 28 statement.

As previously announced, Cardinal Dolan will also give the benediction at the close of the Republican National Convention in Tampa, Fla.

May I humbly remind Cardinal Dolan,
as he preens and pontificates under the spotlights
of the political conventions:
there is really room for only ONE superstar in his religion.
And as the Cardinal addresses and blesses the Republicans and their billionaire buddies,
as he smiles upon those who would destroy Social Security and voucher Medicare to death,
and as he joins with those who readily admit they they “don’t care about the very poor”......
it would be good, it would be very good ...for the good Cardinal
to remember -and take to heart- the words of his boss,
who once said “What you do for the least of these you do for me”.
Unless perhaps, the Cardinal is working for someone else these days?
Not only do Politics and Religion not mix:
they bring out the worst in each other.
And they destroy each other.

The National Council of Catholic Bishops for years has had as a priority to defend and to aid the poor. The beginnings and continuance of Catholic Charities in the US has served the poor in our nation for years and years. Also, Catholic priests and religious have served in poverty areas for these many years; and, Catholic hospitals NEVER turn away those who are too poor to pay for health services. With due respect,please investigate this information before making a judgment. Lastly, Cardinal Dolan is the present President of the National Council of Catholic Bishops. Finally, we as Christians are commanded to judge not lest ye be judged. So, please research for correct information.