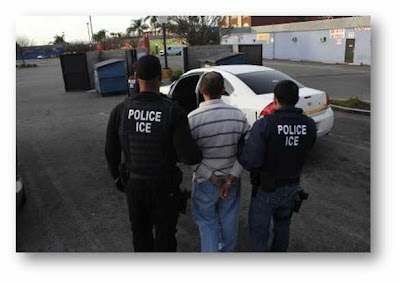 President Obama is forcing ICE agents to violate their own oaths of office...


Saying they’re fed up with being told they can’t do their jobs, 10 immigration agents on Thursday sued the Obama administration to try to halt the president’s new non-deportation policy and an earlier memo instructing them not to go after rank-and-file illegal immigrants.

The lawsuit, filed in a federal court in Texas, adds a legal controversy to the political fight that has been brewing over President Obama’s immigration policies, which have steadily narrowed the range of immigrants the government is targeting for deportation.

The 10 U.S. Immigration and Customs Enforcement (ICE) agents and deportation officers said Mr. Obama’s policies force them to choose between enforcing the law and being reprimanded by superiors, or listening to superiors and violating their own oaths of office and a 1996 law that requires them to demand proof of legal status from those they suspect are not in the country legally.