Women hold topless rally in NYC park, talk about their alien creators. What? 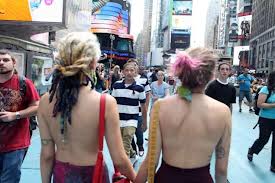 I am guessing the men never heard a word the topless women were saying...


NEW YORK (Reuters) - Some two dozen topless women protested in a New York City park on a hot, sweaty Sunday as part of what they called "National Go-Topless Day" to draw attention to inequality in topless rights between men and women.[...]
It is legal for women to go topless in public in New York City but laws vary widely across the United States. Heaven and her colleagues say discrimination is unconstitutional and they want full equality.
Similar protests were scheduled in about 30 U.S. cities and 10 around the world, organisers said.

The annual Go-Topless Day was established in 2007 by a former sports car journalist called Rael, who founded a religion called the Raelian Movement after he said he was visited by a space alien in a French volcano park who told him life on Earth was created by extraterrestrial scientists, according to an account on his website.
Occasional references to alien creators did not seem to register with the crowd, which focused mostly on the breasts.