The Party is Over: Taliban behead 17 for attending mixed dance party 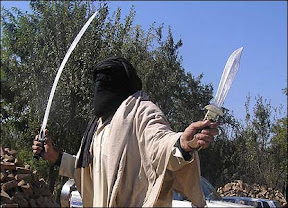 Why do they call Islam the religion of peace?


KANDAHAR, Afghanista - The Taliban beheaded seventeen party-goers, including two women dancers, in Afghanistan's volatile Helmand province as punishment, recalling the darkest days of rule by the ultra-conservative Islamist insurgents before their ouster in 2001.

The bodies were found on Monday in a house near the Musa Qala district where a party was held on Sunday night with music and mixed-sex dancing, said district governor Nimatullah. Men and women do not usually mingle in Afghanistan unless they are related, and parties involving both genders are rare and kept secret.