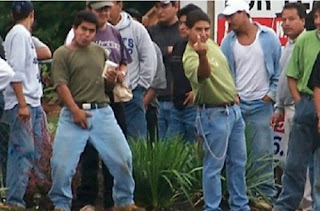 
A small group of immigrants gathered in Woodbury Monday to protest the use of the word “illegal” to describe those who have entered the United States without documentation.

“By saying illegal, they’re assuming that we broke a criminal law,” said Jackeline Saavedra, 27, of Bay Shore, a Touro Law Center student who identified herself as undocumented. “Not everybody enters illegally.”

Osman Canales, 23, an immigrant rights advocate in Huntington who organized the protest, said using the word “illegal” criminalizes a whole community. “It’s a racist word against our community, so we’re just here to raise awareness,” he said.

The protest mirrored a larger effort nationwide to push media outlets and people in general to stop using the word “illegal” when referring to immigrants.

The “Drop The I-Word” campaign was organized by The Applied Research Center, a New York City-based racial justice think tank. Its goal, according to its news website, Colorlines.com, is to “eradicate the slur ‘illegals’ from everyday use and public discourse.”

Racist word? If I moved to USA without proper documents I'd be an illegal immigrant too. I'm a Caucasian Canadian. Also, if you want your illegal immigrant Draft Dodgers back, take em. They're old now and clogging up our health system.