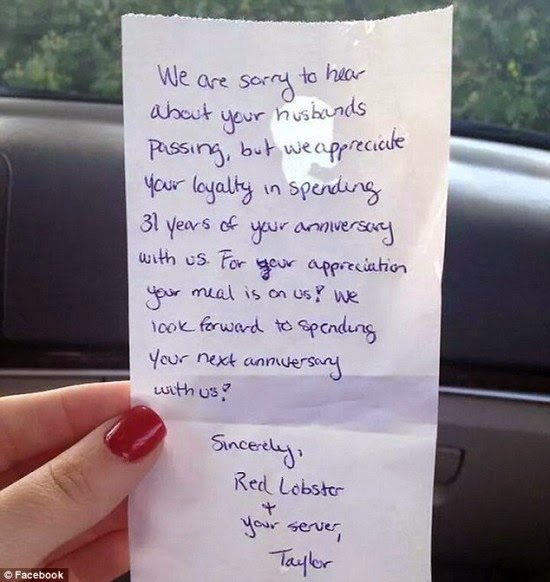 Hat tip to Weasel Zippers for this great story. I ate at Red Lobster on July 4th. I hadn't been there in a year and was pleasantly surprised by the improved service and fresh food.


COLUMBIA, Mo. – A Columbia, Mo. Red Lobster server went above and beyond her duty recently, picking up the tab for a widow celebrating her wedding anniversary with her daughter.
For 31 years the woman and her husband spent their anniversary at Red Lobster. The unidentified woman’s husband passed away in March, so her daughter decided to keep the tradition alive, taking her mom out for an anniversary meal.
The daughter’s brother, Reddit user Coppin-it-washin-it, said the server asked his mom and sister if they were celebrating anything special. His sister explained to the server her parents’ tradition, and the rest of the meal went normally. Until it was time for the bill.
Instead of giving them the bill, the server handed them a note. Coppin-it-washin-it posted a photo of it on Reddit....
(See above)

NewsChannel 5 confirmed the authenticity of the note with a spokesperson for Darden Restaurants.
“What Taylor, the server, and Chad, the manager on duty, did demonstrates how our teams live Red Lobster’s core values of genuine caring and hospitality each day,” said spokesperson Erica Ettori. “All of us at Red Lobster are truly proud of the Columbia team and appreciate their commitment to making every guest’s dining experience a special one. We also extend our wishes to the family who dined with us and look forward to serving them again next year!”