Obama is going to take his pen and violate the law and the Constitution again... 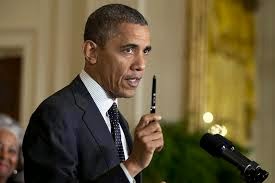 Since Obama can't get his way on immigration reform, he is going to shred the law and the Constitution again...

WASHINGTON — President Obama said Monday he would use his executive power to make potentially sweeping changes to the nation’s immigration system without Congress, acknowledging the death of his more than yearlong effort to enact compromise legislation granting legal status to 11 million immigrants here illegally.
Mr. Obama said he had ordered a shift of immigration enforcement resources from the interior of the country toward the southern border, and was asking his team to report back to him by the end of the summer on additional actions he could take. The actions could be as far-reaching as giving work permits and protection from deportation to millions of immigrants now in the country.
Mr. Obama angrily blamed congressional Republicans for the collapse of the legislative effort.