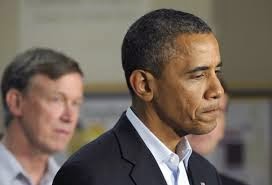 
President Barack Obama will speak in Denver’s Cheesman Park on July 9, and Senator Mark Udall (D-CO), Colorado Governor John Hickenlooper (D), and congressional candidate Andrew Romanoff (D-CO), will not be there.
All three will be on the ballot this November and all three say “prior commitments” will prevent them from attending the event with Obama.
According to The Denver Post, Udall, Hickenlooper, and Romanoff are all three “in the fight of their political careers.”
For example, Udall’s pro-amnesty position is receiving more and more press with each passing day. And Hickenlooper’s false statements on gun control, his fumbling of questions on gun control from Weld County Sheriff John Cooke, and his admission that he would sign gun control again if given the chance, sparked a firestorm in the media in early June.
Keep on reading…

John Hickenlooper in 2008: Obama Is The Change America Needs