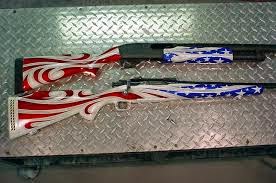 If our forefathers hadn't owned guns, there wouldn't be a U.S.A.


The latest Fox News national poll finds 83 percent of voters consider serving on a jury an “act of patriotism.”
While that’s a large majority, other actions rank even higher:  94 percent say flying an American flag shows patriotism, 93 percent say voting in elections counts, and 90 percent consider joining the military an act of patriotism.
About eight voters in 10 believe staying informed on the news (79 percent) and paying taxes (78 percent) are ways to show national loyalty.
There’s less consensus about some other activities: 70 percent of voters consider volunteering on a political campaign to be patriotic, 61 percent say the same about participating in a political protest and 50 percent say owning a gun is an act of patriotism.