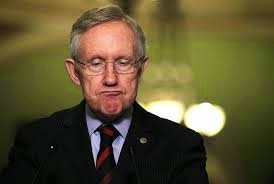 After you play the race card so many times, it becomes automatic...


Senate Democrats said they plan to unveil legislation in the coming weeks in response to the Supreme Court’s controversial ruling in the Hobby Lobby contraception case.
“This Hobby Lobby decision is outrageous, and we’re going to do something about it,” Senate Majority Leader Harry Reid told reporters on Capitol Hill today. “People are going to have to walk down here and vote, and if they vote with the five men on the Supreme Court, I think it’s — they’re going to have — be treated unfavorably come November with the elections.”
Reid said the Senate needed to do something to “ensure that women’s lives are not determined by virtue of five white men.”

Sen. Harry Reid knows that his fellow Mormon leaders are aware of a hard-core pornographic drawing in the "Book of Abraham" which is Mormon-approved scripture.
This Book is part of the "Pearl of Great Price" which, along with the "Book of Mormon" and the "Doctrine and Covenants," make up the LDS church's "triple combination" in one volume.
The porn is found in Fig. 7 of Facsimile 2 in the "Book of Abraham" which shows two beings facing each other, which were described by Joseph Smith as representing the "Holy Ghost" and "God sitting upon his throne," the latter clearly showing an aroused male sex organ.
After Smith published this sketch in his newspaper in 1842, which offended Mormon sensibilities, the phallic portion was whited out for more than a century until the "restored" LDS church decided in 1981 to restore what had long been censored!
Equally shocking was the discovery that the "Book of Abraham" has nothing to do with Abraham or his God but was actually based on ancient Egyptian funeral documents depicting occultic obscene practices - and the original sketches showed an erotic phallus on both beings including the one Smith blasphemously claimed was the Holy Ghost!
Dirty Harry is a member of the blasphemous counterfeit of real Christianity known as hypocritical MOReMONeyISM which has a 184-year-old history of fooling the unwary with false reports about "buried treasure" and "golden plates" in New York along with Smith's later land speculation and illegal banking in Ohio and finally money counterfeiting in Illinois and Utah! As long as the Mormon church refuses to excommunicate Harry Greed, this paper you're now reading will circulate around the world!
For more information see "Book of Abraham" (Wikipedia). Also see Jerald and Sandra Tanner's "Mormonism - Shadow or Reality?" which reproduces the original Egyptian X-rated drawings and shows how Smith altered them and created one of his many frauds. (Smith would have been proud of Dirty Harry!) Highlights in the classic Tanner work can be seen by typing "Facts from Mormons (By a Utah Resident)" and "What LDS Leaders Say" on Yahoo.