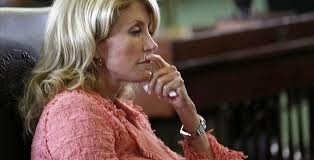 
[B]ut what is ultimately refreshing about Tuesday’s results in the Lone Star State is not simply that a bad candidate lost; rather, what lost were the extravagant efforts by national Democrats and a left-wing media complex to champion as the bold new face of their party a candidate who insisted that Texas was one Republican governor away from segregated water fountains and Hobby Lobby goon-squads policing women’s uteruses.
If Democrats want to peddle that shtick successfully, they should stick to San Francisco.
One last tidbit: Davis’s former Texas senate seat, which she gave up to run for governor? It now belongs to Republican Konni Burton. She is a tea-partier, and pro-life.

This story makes me smile.