Stupid: Eric Holder Finally finds something he wants to investigate... 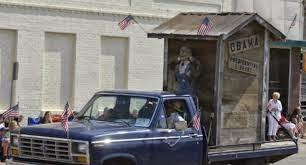 It's an Obama outhouse library float in Nebraska!


The U.S. Department of Justice has sent a member of its Community Relations Service team to investigate a Nebraska parade float that criticized President Obama.A Fourth of July parade float featured at the annual Independence Day parade in Norfolk sparked criticism when it depicted a zombie-like figure resembling Mr. Obama standing outside an outhouse, which was labeled the “Obama Presidential Library.”The Nebraska Democratic Party called the float one of the “worst shows of racism and disrespect for the office of the presidency that Nebraska has ever seen.”