Famous illegal immigrant may be stuck in McAllen, Texas... 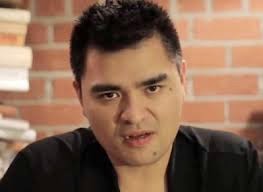 Illegal immigrant and former journalist and Pulitzer winner, Jose Antonio Vargas, went to McAllen, Texas as a PR stunt. He may now be stuck there....


Jose Antonio Vargas, who made national headlines by coming out as an illegal immigrant three years ago in the New York Times, may be stuck in a border town in Texas...
He then said a DREAMer named Tania told him "the reality on the ground in a border town like McAllen." She told Vargas he "might not get through airport security, where Customs and Border Protection (CPB) also checks for IDs, and you will definitely not get through the immigration checkpoints set up within 45 miles of this border town."
“Even if you tell them you’re a U.S. citizen, they will ask you follow-up questions if they don’t believe you,” Tania told him, emphasizing that he would be asked for documentation.
Vargas conceded that he does "not have a single U.S. government-issued ID" and, like most of the country's eleven million illegal immigrants, does not have a driver's license. But Vargas notes ever since he came out as an illegal immigrant in a New York Times magazine profile, "I’ve been the most privileged undocumented immigrant in the country."
"The visibility, frankly, has protected me," he writes. "While hundreds of thousands of immigrants have been detained and deported in the past three years, I produced and directed a documentary film, Documented, which was shown in theaters and aired on CNN less than two weeks ago."
He has also co-founded a group that advocates for illegal immigrants and has been "traveling non-stop for three years, visiting more than 40 states," by using "a valid passport that was issued by my native country, the Philippines."
"But each flight is a gamble," he concedes. "My passport lacks a visa. If TSA agents discover this, they can contact CBP, which, in turn, can detain me."