The dangers of extreme weather can be heartbreaking. It's time to #ActOnClimate. pic.twitter.com/hfGTXht97h
— Barack Obama (@BarackObama) October 29, 2014


NOAA disagrees: (Accent is mine)

Concerning the issue of whether storms (Sandy and the nor’easter) are signals of the impact of climate change on extreme weather:


Researchers at Colorado State University say the devastation caused by Hurricane Sandy in October was not caused by human-induced climate change.
In a recently released paper discussing the unusual “super-storm” that devastated the New Jersey shore and flooded the New York City subway and a traffic tunnel, CSU researchers William Gray and Phil Klotzbach say the influence of human activity on the formation and intensity of Atlantic hurricanes “is likely to be negligible.”
“As extensive and tragic as Sandy’s spawned destruction has been, it is not beyond the range of what is known about the variability of rare but extreme cyclone events,” Gray and Klotzbach wrote.
The researchers acknowledge that human activity has led to an increase in carbon dioxide being released into the Earth’s atmosphere and an increase in average temperature. But Gray and Klotzbach do not think that has caused more frequent and powerful hurricanes to form.

As for the claim climate change is causing more wildfires, that is false too.  Data (1960 on right) from nifc.gov. 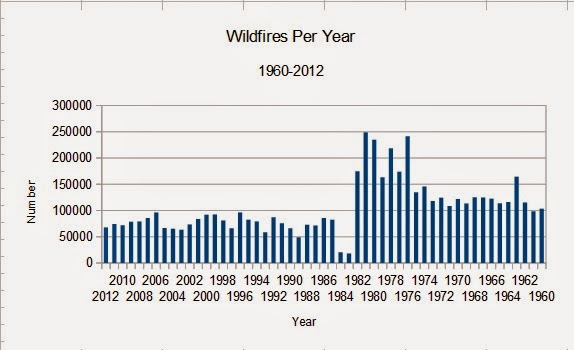