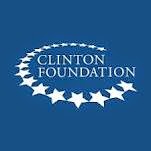 It isn't a charity. It's a slush fund.


The Clinton Foundation’s finances are so messy that the nation’s most influential charity watchdog put it on its “watch list” of problematic nonprofits last month.
The Clinton family’s mega-charity took in more than $140 million in grants and pledges in 2013 but spent just $9 million on direct aid.
The group spent the bulk of its windfall on administration, travel, and salaries and bonuses, with the fattest payouts going to family friends.
On its 2013 tax forms, the most recent available, the foundation claimed it spent $30 million on payroll and employee benefits; $8.7 million in rent and office expenses; $9.2 million on “conferences, conventions and meetings”; $8 million on fund-raising; and nearly $8.5 million on travel. None of the Clintons are on the payroll, but they do enjoy first-class flights paid for by the Foundation.
Keep on reading…