Iran is already actively violating the terms of the nuke agreement 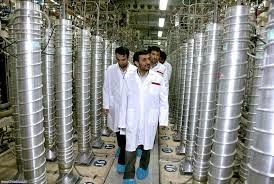 Well, that didn't last long. Of course, team Obama and the EU will ignore the violations. They want to keep public opinion on their side.


And now the Iranians are actively violating the terms of the agreement, which hasn’t even been formally written down or signed yet, according to the Times of Israel:


Iran will begin using its latest generation IR-8 centrifuges as soon as its nuclear deal with the world powers goes into effect, Iran’s foreign minister and nuclear chief told members of parliament on Tuesday, according to Iran’s semi-official FARS news agency.
If accurate, the report makes a mockery of the world powers’ much-hailed framework agreement with Iran, since such a move clearly breaches the US-published terms of the deal, and would dramatically accelerate Iran’s potential progress to the bomb.
Iran has said that its IR-8 centrifuges enrich uranium 20 times faster than the IR-1 centrifuges it currently uses.
According to the FARS report, “Iran’s foreign minister and nuclear chief both told a closed-door session of the parliament on Tuesday that the country would inject UF6 gas into the latest generation of its centrifuge machines as soon as a final nuclear deal goes into effect by Tehran and the six world powers.”