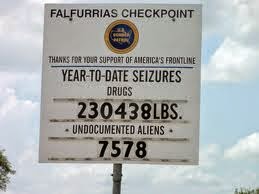 
When Border Patrol agents checked a bus passenger’s papers at the Falfurrias checkpoint last week, they did a double-take.
The bus passenger handed them a driver’s license identifying himself as David, a 34-year-old man from Edinburg, according to federal court records.
Along with the driver’s license, the man had a birth certificate and a Social Security card identifying him as David.
Border Patrol agents working the checkpoint at 1 a.m. Thursday, though, knew David — and he wasn’t the guy on the bus.
They would have recognized him: David is a fellow Border Patrol agent assigned to the Falfurrias area, according to federal court records.
Border Patrol agents pulled the passenger off the Houston-bound bus and took him to the Falfurrias Station for questioning. The man admitted he was actually 24-year-old Orlando Castaneda-Diaz, a Mexican citizen who claimed to have illegally crossed the border on April 12, according to the federal criminal complaint against him.