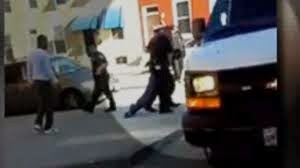 Hwang Jung, owner of the market at North Fremont Avenue and Mosher Street where the newly disclosed stop took place, said officers in suits came into his store last week asking to see surveillance footage from April 12 at around 8:30 a.m.
After viewing the footage, the officers gave him their number and said two more officers would come copy the footage, which happened a few hours later, Hwang said.
The footage was lost, he said, when his store was looted in the days after Gray's death. He said he couldn't be sure exactly what day the officers came by but he thought it was early in the week of April 19.
It was April 24, a Friday, that Deputy Commissioner Davis told reporters that there had only been three stops en route to the police station: the first to put leg irons on Gray, the second "to deal with Mr. Gray" (an incident, he said, that remained under investigation) and the third to pick up a prisoner in an unrelated matter.
The new stop, Davis said Thursday, came between the first and second stops.[...]

Batts, the police commissioner, has said Gray should have been buckled in.
"We know he was not buckled in the transport wagon, as he should've been. No excuses for that, period," Batts said last week.
As for when Gray suffered a severe spinal injury, Batts said there was potential it could have happened either in or outside the police van.
Police have said five of the six officers have been interviewed by detectives, while the sixth invoked the right to decline to be questioned.
WJLA reported the van driver was the officer who has not be interviewed.