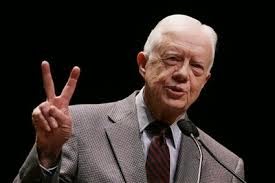 
Former President Jimmy Carter won’t be welcomed with open arms when he visits Israel in the coming weeks.
Israeli President Reuven Rivlin and Prime Minster Benjamin Netanyahu rejected a request from the former president to meet with them when he visits Israel in the coming weeks, a senior official told Haaretz.
The Foreign Ministry and the National Security Council of the Prime Minister’s Office made the decision after inner consultations over the past few days. According to the senior official, the decision was made for Rivlin and Netanyahu not to meet with Carter because of what they viewed as his “anti-Israeli” stance over the last few years.
Specifically the Foreign Ministry recommended Carter not meet with the Israeli leaders due to his stance during the summer war in Gaza in which Carter called for the removal of Hamas from the American State Department’s list of terror organizations.
Israel however did approve Carter’s request to visit Gaza during his visit to Israel.