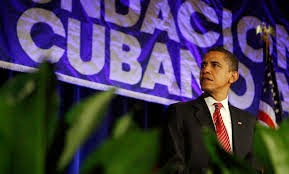 Obama should move to Cuba and make both Cubans and Americans happy.


Fidel Castro should be thankful he never really had to run for re-election. A new poll conducted by a Miami polling firm of Cubans (as in actually living in Cuba) finds that his favorably ratings are pretty mediocre on the island. Only 44 percent of Cubans have a positive opinion of El Caballo. Meanwhile, 80 percent of Cubans have a favorable opinion of United State President Barack Obama, which is much higher than his 47 percent approval rating back here in America.
The poll was conducted by Bendixen & Amandi International for Univision, Fusion, and the Washington Post. They surveyed 1,200 Cubans in mid-March. It is the first privately conducted poll done in Cuba since the country became communist over 50 years ago. So there's no reliable data to compare Fidel's past popularity on the island.