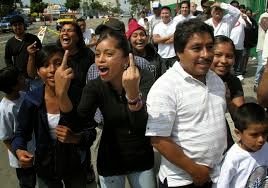 All the illegals, even the older ones who are criminals, claim they are "Dreamers."


Deportations have plummeted by another 25 percent so far this year, with the government even struggling to find enough criminals to kick out of the country, according to the latest statistics that suggest President Obama’s amnesty has hampered removal efforts.

That could undercut Mr. Obama’s legal justification for the deportation amnesty, where the pace of deportations has been raised as a key way of judging whether the president is complying with the law by trying to grant “deferred action” to millions of illegal immigrants.

The numbers for the first six months of fiscal year 2015, which began Oct. 1, are striking: The government has deported just 117,181 immigrants, which is just three-quarters of the 157,365 immigrations kicked out during that same period a year earlier, according to figures provided to Congress.

“This is a stunning free fall in enforcement activity, not just deportations but arrests too,” said Jessica Vaughan, policy studies director at the Center for Immigration Studies, which supports stricter immigration limits. “It turns out that even criminal arrests and deportations have dropped, including those of the ‘worst of the worst’ Level 1 felons, and the huge numbers of criminal releases continues.” Keep on reading...