Powerhouse: Rubio already has $40 million committed to his campaign... 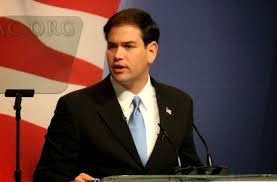 Clearly a contender with that kind of early cash...


(Reuters) – Less than a week after announcing his 2016 campaign for president, Republican Senator Marco Rubio of Florida doesn’t need to worry about money.
It’s as good as in the bank.
“Marco Rubio will have the resources necessary to run a first-class campaign, that’s already been determined,” said billionaire Florida auto dealer Norman Braman, a former Jeb Bush supporter who is now one of Rubio’s highest-silhouette donors.
Annandale Capital founder George Seay, who is hosting a Rubio fundraiser with the moneyed Dallas elite at his 7,000-square-foot, seven-bath home on Tuesday, said: “Marco has had zero trouble raising money.”
At least seven other Rubio mega donors say their candidate has already received monetary commitments in excess of the $40 million he will likely need to battle through a presidential primary season that will feature a crowd of seasoned Republican candidates with strong financial backing.
Keep on reading…