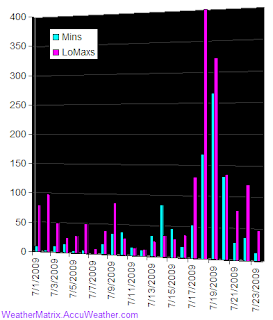 Have you noticed this July is cooler than normal? You would be correct. According to AccuWeather, there will be 3000 new record lows nationwide by the end of July.

First, some stats. 1,044 daily record low temperatures have been broken this month nationwide according to NCDC -- count record "low highs" and the number increases to 2,925, surely to pass 3,000 before the end of the month.

The period of July 17-20 was the worst, with over 1,600 stations breaking records. It's worth noting that these stats include all records across the nation.