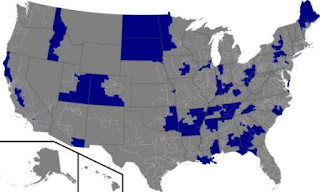 
The Blue Dog Coalition may block the Democrat's plan to raise taxes and spend over a trillion dollars, in the first ten years, on a health care reform plan that would actually raise costs. Currently, the Democrats pushing health care reform are very short of votes on the vital Energy and Commerce Committee.

"Last time I checked, it takes seven Democrats to stop a bill in the Energy and Commerce Committee," Ross told reporters after a House vote. "We had seven against it last Friday; we have 10 today."

Three House committees are slated to begin considering the $1 trillion-plus bill this week, but the Energy and Commerce looms as the biggest challenge. That's because it counts among its 36 Democratic members seven members of the Blue Dog Coalition, a fiscally conservative bloc that is opposing the House Democrats' effort.

These are the people that the pressure needs to be placed on. I hope people like Congressman Mike Ross (D-AR) are listening.