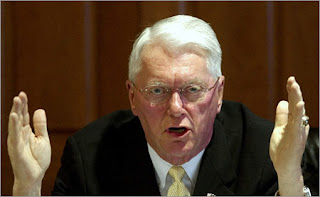 I have the same conservative principles in 2009 as I had when I was first elected to Congress in 1986. Over the past twenty-two years I have always done what I thought was right for Kentucky even if that meant taking positions that were not popular with the media or even leaders of my own party. Speaking out against bailouts and wasteful spending supported by the Republican leadership in the Senate and a Republican President last year angered many of my colleagues in my own party, but I didn’t run for public office for fame or public acclaim. When I cast a vote I think about how it will affect my grandchildren and the next generation of Kentuckians, not my next election or invitation to a D.C. cocktail party. The people of Kentucky know where I stand and I am honored that they have continued to send me back to Congress to represent them each time I have run for the House and Senate.

Unfortunately, running for office is not just about the issues. To win a general election, a candidate has to be able to raise millions of dollars to get the message out to voters. Over the past year, some of the leaders of the Republican Party in the Senate have done everything in their power to dry up my fundraising. The simple fact is that I have not raised the funds necessary to run an effective campaign for the U.S. Senate. For this reason, Iwill not be a candidate for re-election in 2010. more here

Email ThisBlogThis!Share to TwitterShare to FacebookShare to Pinterest
Labels: Bunning, drops out