The Democrats are using a CBO analysis to say their health Care Plan costs A little over $1 trillion over ten years. This gives the impression their plan will only cost $100 billion per year. Is this true? No. The plan is slow to ramp up. This makes the first five years cost abnormally low. Once the plan gets going, the cost will be over $200 billion per year. That is double what many people are being led to believe.

It's important to keep in mind that the most costly aspects of the legislation involve providing subsidies to individuals to purchase health care ($773 billion) and to expand Medicaid ($438 billion), but it takes several years for those provisions to kick in. As you can see from the chart below, that means that the costs start out relatively modest but ramp up over time. In the first three years of the plan the cost of the subsidies and Medicaid expansion is just $8 billion; in the first five years, it's $202 billion; but in the last five years, it's $979 billion. Put another way, 17 percent of the spending comes in the first five years, while 83 percent comes in the second five years. What this means is that the American people see $1 trillion over 10 years and they think that means the bill would cost about $100 billion a year -- but the reality is more than double that. In the final year of the CBO estimates, 2019, the spending hits $230 billion. (accent is mine) 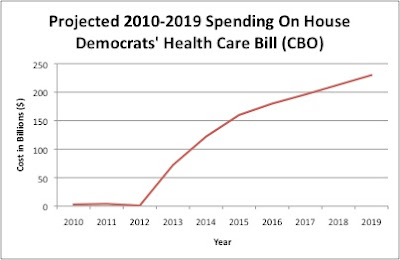 Even with the estimated $230 billion per year cost in 2019, the CBO predicts there will still be 17 million left uninsured. Democrats are planning on paying for their health care reform bill with a wide variety of taxes.
Posted by Bluegrass Pundit at 4:27:00 AM