President Obama continues to slide in the polls. Thirty-nine percent of Americans now strongly disapprove of him.

The Rasmussen Reports daily Presidential Tracking Poll for Saturday shows that 30% of the nation’s voters now Strongly Approve of the way that Barack Obama is performing his role as President. Thirty-nine percent (39%) Strongly Disapprove giving Obama a Presidential Approval Index rating of -9.

The number who Strongly Disapprove of the President has increased slightly following the prime time press conference on Wednesday night. That figure—39%–is now at the highest level yet recorded. As a result, the overall Approval Index has fallen to the lowest level yet recorded for this President. …

Overall, 49% of voters say they at least somewhat approve of the President’s performance. This is the second straight day that his overall approval rating has been below 50% among Likely Voters nationwide. Fifty-one percent (51%) disapprove. 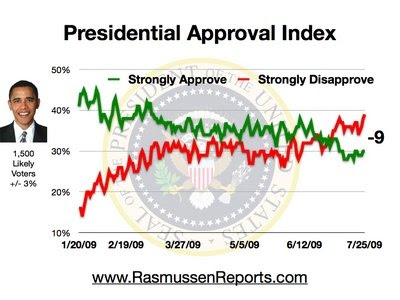