President Obama continues his slide in the polls. His Presidential Approval Index rating is now -12. This is a new low. President Obama's overall approval is 48%. Not surprisingly, after Obama's recent remarks on the Gates arrest and racial profiling, 49% of voters think Obama views America as unfair and discriminatory.

The Rasmussen Reports daily Presidential Tracking Poll for Thursday shows that 28% of the nation's voters now Strongly Approve of the way that Barack Obama is performing his role as President. Forty percent (40%) Strongly Disapprove giving Obama a Presidential Approval Index rating of -12. That’s the lowest rating yet recorded for President Obama. 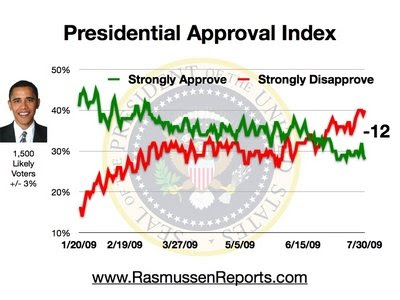