Have Blue Dogs reached a Deal On ObamaCare? 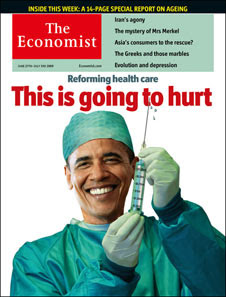 According to this report on MSNBC, liberal Democratic leaders gave in to numerous Blue Dog demands.

RALEIGH, N.C. - After weeks of turmoil, House Democrats reached a shaky peace with the party's rebellious rank-and-file conservatives Wednesday and cleared the way for a vote in September on sweeping U.S. health care legislation.

In the House, Democratic leaders gave in — at least temporarily — to numerous demands from rank-and-file rebels, so-called Blue Dogs from the conservative wing of the party who had been blocking the bill's passage in the last of three committees.

The House changes, which drew immediate opposition from liberals in the chamber, would reduce the federal subsidies designed to help lower-income families afford insurance, exempt additional businesses from a requirement to offer insurance to their workers and change the terms of a government insurance option.

As our rights are infringed upon by our own government, Americans and those here legally will never benefit from a decent health care plan, owing to the abomination called ILLEGAL IMMIGRATION. By an Act in United States Congress passed in 1986, Hospital and ambulance services must provide care to anyone needing emergency treatment in spite of citizenship, legal status or capacity to pay. The predicament being that 20 million plus illegal immigrant families are using this law, for even minor ailments such as the common cold. Why should foreign nationals sign up for health care or anything, when they can get Taxpayers to pay for it all..?
But this is not just an American dilemma, as it has been forcibly imposed on subjects of the European Union. This is causing a major derailment in the EU, because both legal and illegal entrants are stealing away the single payer medical care providers, to the citizens who have paid into the system from the time they first started work.

A decent controlled governmental health care benefit, can—NEVER--be established, when a startling report disclosed the details of a cloaked meeting between nationwide businesses and open-borders groups working under the radical cover of the IMMIGRATIONWORKSUSA a lobbying group. The secret Capitol Hill National Summit" took place last month and revealed the sinister intention behind the lobbying entities efforts.
Tamar Jacoby, who runs ImmigrationWorksUSA, kicked off the conference by stating the true aspiration of the coalition. The basic target is to promote THE FREE FLOW OF LABOR INTO THE USA, with—AS ALWAYS-- the taxpayer being the beneficiary for corporate welfare. They want expedited cheap labor, where no American worker—NEED APPLY!

WE MUST ACT NOW, OR IT WILL BE TOO LATE! These special interest lobbyists are well furnished with money from corporate America. We must empower mandated E-Verify as part of the Save Act, where everybody is screened in the workplace. Call your lawmaker TODAY! at 202-224-3121 I Want a health care system--even government run. BUT IT"S SURE TO FAIL, IF TAXES ARE BEING EXTORTED TO PAY FOR FREE HEALTH CARE FOR ILLEGAL IMMIGRANTS?

Millions of phone calls from angry Americans are jamming the Washington Switchboards. It is making these pandering politicians to corporate welfare, very anxious. Support for the bi-partisan E-VERIFY PART OF THE SAVE Act, which will expand E-Verify and protect American Workers! We must focus on the monolithic problem in terminating illegal immigrants-and the jobs that attract illegal aliens. WE WILL ALWAYS BE PAYING FOR ILLEGAL ALIENS, UNLESS WE DO SOMETHING NOW? Many GOP members are against a Path to citizenship for lawbreakers, so we mostly need the phones ringing in the ears of Democrats, who see the millions of illegal aliens as a positive voting block. WE MUST STOP IT NOW OF SUFFER FROM IRREVERSIBLE POPULATION GROWTH.

DEMAND NO AMNESTY! NO FAMILY UNIFICATION KNOWN AS CHAIN MIGRATION! BUILD THE ORIGINAL FENCE! NO MORE HEALTH CARE OR ANY OTHER KIND OF BENEFITS FOR ILLEGAL IMMIGRANTS. CLOSE THE BORDER AND STATION THE NATIONAL GUARD. $2.5 TRILLION DOLLARS, JUST IN RETIREMENT BENEFITS? Learn uncorrupted facts at NUMBERSUSA.