The Road map to Grinding Health Care to a Halt

Do you want to now how the Democrats plan to grind our health care system to a halt? Just check this bureaucratic map they have released. Does anyone really think this would make health care more efficient and affordable? 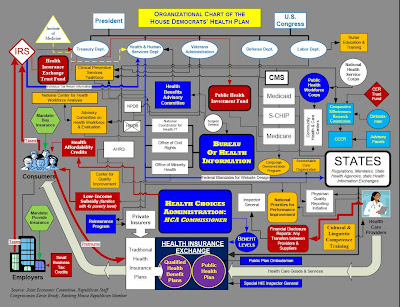 Stressing his point, House Minority Leader John Boehner unveiled a dizzying flow chart that he said would represent how health care coverage would look under the plan being pushed by House Democrats.

The chart shows the president and Congress at the top, with dozens of agencies and officials responsible for various slices of the health care program underneath.

The suggestion inherent in the chart is that the health care system would grind to a near-halt under the Democrats' plan.