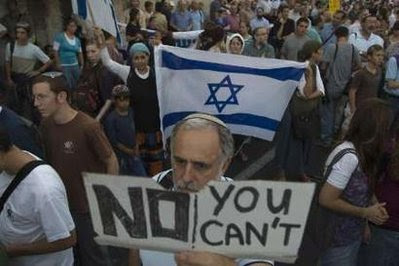 JERUSALEM – President Obama's policies against Jewish construction
in eastern Jerusalem and the strategic West Bank were slammed as "racist" today by participants in a rally drawing about 2,000 Israelis in front of the U.S. consulate in Jerusalem.

Mitchell, Obama's envoy to the Israeli-Palestinian conflict, is here discussing the American administration's call for a halt to all Jewish settlement
activity, including natural growth or accommodating the needs of existing Jewish populations in the areas in question.

"Obama should not be pressing Israel to compromise and freeze building in Judea, Samaria and eastern Jerusalem," protest organizer Yaacov Steinberg told WND.

"All these steps in the past just brought more Palestinian terror and showed Israeli weakness," said Steinberg, director of a coalition of West Bank Jewish organizations.

Speaking at the rally, Rabbi Eliezer Waldman, who heads the prestigious "Nir" Torah seminary in the West Bank city of Kiryat Arba, called Obama a "racist."

"How dare he tell the Jews where they can or can't live! The era when Jews were banned from living in different places has ended," Waldman exclaimed.