Graham Vows to Give Up Immigration Reform if Obamacare Passes 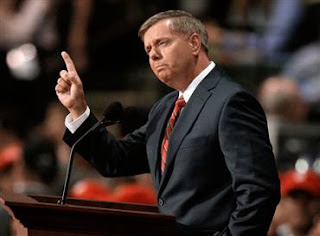 Republican Sen. Lindsey Graham (S.C.) has been working with Democratic Sen. Charles Schumer on a bipartisan immigration reform plan. Graham say it's over if Democrats ram their partisan health care bill through this weekend.

In an email and on Twitter today, Republican Sen. Lindsey Graham (S.C.) said if the healthcare bill goes through this weekend, "that will, in my view, pretty much kill any chance of immigration reform passing the Senate this year."

Graham has been working with New York Democrat Charles Schumer on the framework for an immigration measure. Although immigration is likely a longshot either way, proponents of reform are trying to push the issue back toward hot-button status this year.

The death of immigration reform will be a small consolation prize if Democrats nationalize Americans health care. If this isn't a 'wake up' call for Hispanic representatives, they have their heads up their butts.
Posted by Bluegrass Pundit at 1:59:00 PM