Obama to Israel: No Bunker Busters for You! 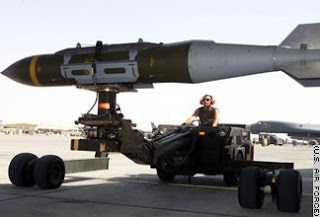 There has been a buzz on the Internet about the US sending bunker buster bombs to a military base in Diego Garcia. Some have speculated the U.S. is preparing to bomb Iran's nuclear facilities. The truth may be just the opposite. President Obama may be trying to prevent Israel from attacking Iran's nuclear facilities by denying them the weapons they need.

WASHINGTON — The United States has diverted a shipment of bunker-busters designated for Israel.

Officials said the U.S. military was ordered to divert a shipment of smart bunker-buster bombs from Israel to a military base in Diego Garcia....

"This was a political decision," an official said....