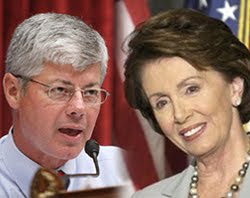 Nancy Pelosi appears to have nixed any possibility of a vote on stronger anti-abortion measures demanded by Rep. Stupak and crew. Pelosi is planning to "go for it' without them. This probably means she would have lost the support of more liberals by allowing an anti-abortion vote than she would have gained by picking up a few more "Blue dogs."

Two pro-life GOP members close to Stupak tell NRO that any Stupak deals are off. They just spoke with him and they said he's finished with Pelosi. They rejected his enrollment corrections proposal.

He's finished with Pelosi? Welcome to the club Rep. Dtupak. What took you so long to realize what the vast majority of Americans realized months ago?
Posted by Bluegrass Pundit at 12:08:00 PM