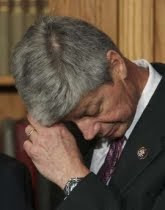 Susan B. Anthony List Candidate Fund President Marjorie Dannenfelser said the group was revoking its "Defender of Life" award to Stupak, which was to be awarded at its Wednesday night gala.

"We were planning to honor Congressman Stupak for his efforts to keep abortion-funding out of health care reform. We will no longer be doing so," Dannenfelser said. "Let me be clear: any representative, including Rep. Stupak, who votes for this health care bill can no longer call themselves 'pro-life.'"

Bart Stupak angered his liberal constituents long ago and earned himself a primary cahallenger. Now, he has angered his conservative and pro-life constituents. It is hard to see who his constituent base will be this fall. There are a large number of Independents, but they are notoriously fickle and over 60% opposed the Democrat's health care reform bill. What in the world could Rep. Stupak have been thinking?
Posted by Bluegrass Pundit at 5:54:00 AM