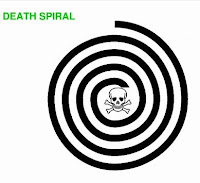 Have Democrats intentionally created a private insurance death spiral? The answer appears to be yes. Although there are penalties in Obamacare for failing to purchase insurance, the enforcement has no teeth. The IRS will collect taxes fines from Americans who fail to purchase insurance. Normally, the IRS is much feared for their ability to collect money from delinquent taxpayers by assessments, liens or seizures. These enforcement provisions are prohibited for collection of fines for lack of coverage. The IRS can't even charge interest on the past due amount. These collection prohibitions were deliberately written into law. If you fail to pay the lack of coverage fine, the IRS can only deduct it from your refund, if you get a refund. Of course, many people can adjust their withholding to eliminate the possibility of a refund. What does this mean? Insurance companies can't penalize people for pre-existing conditions starting in 2014. If everyone isn't forced to buy insurance, people can wait until they face huge medical bills and then enter the system for coverage. This will be like being able to purchase car insurance after a wreck and have the damages payed for. There is a strong disincentive to pay into the system during healthy periods. Without healthy people and young people being forced into the system, private health insurance costs will skyrocket. Then, Democrats will clamor for the public option.

When states tried to fix their individual health insurance markets—the marketplace for those who don't get insurance through their employers—the initial idea was to simply prohibit insurers from discriminating against individuals with preexisting conditions. But that caused what insurers called a "death spiral"—ever higher premiums as relatively healthy people decided to wait until they were sick to buy insurance, leaving smaller and smaller pools of more and more expensive individuals.

The solution to this problem, both in Massachusetts and in ObamaCare, was the individual mandate...

The penalty [for not purchasing insurance] applies to any period the individual does not maintain minimum essential coverage and is determined monthly...