Is KY GOP Senatorial candidate and current KY Secretary of State Trey Grayson a closet RINO? He claims to be a conservative and has the endorsement of senate Majority Leader Mitch McConnell. Grayson is currently running hard hitting ads against his main opponent ophthalmologist Rand Paul. Paul is considered the Tea Party candidate and is leading Grayson significantly in recent polling.

Grayson is trying to portray Rand Paul as having strange foreign policy views. This seems a questionable strategy considering Grayson's own past views. Trey Grayson is a former Democrat and was a supporter of Bill Clinton in 1992. 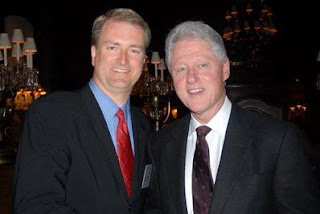 Grayson also has strong ties to the radical "climate change" advocacy movement. In January of 2009, Grayson gave the keynote speech at a "Focus the Nation" climate change event. Greyson's website claims he is against the Democrats Cap and Trade bill, but the main reason seem to be he wants clean coal included.

I oppose the cap and trade plan that passed by the U.S. House of Representatives by a narrow margin and that is currently under consideration in the U.S. Senate.

It is a tax on energy, and it would affect every Kentuckian each time we start our cars or turn on a light switch. This law, if passed, would cause dramatic job losses in Kentucky, both due to the use of less coal and through higher energy costs that will kill manufacturing jobs.

Coal must be a part of a comprehensive national energy solution. We need an all-of-the-above national energy plan that will increase use of our domestic energy resources, including coal, while encouraging and incentivizing investment in alternative sources of energy and new technologies to help us use our domestic resources in an environmentally friendly manner: clean coal technology, carbon sequestration, nuclear power, bio-fuels, solar and wind energy, drilling off-shore, use of oil shale, etc.

At the very least, Grayson is a global warming true believer. At the worst, he wants a Cap and Trade bill; just not the current Democratic one.

Grayson claims to be a fiscal conservative, but once made this outrageous statement.

"Remember, it’s the government’s money. It’s not your money!”

In another interesting video, Trey Grayson seemed a little too happy when he congratulated President Obama on his inauguration. He actually said he wished he could have been there.

The time has come for the GOP establishment to consider dumping Trey Grayson and throw their full support behind Rand Paul.
Posted by Bluegrass Pundit at 9:24:00 PM