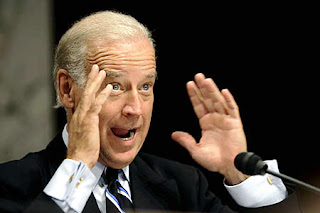 VP Joe Biden should be insulted. However, I am glad al Qaeda doesn't want to kill him. I would really miss the gaffes.


(Telegraph) — US officials have revealed that Osama bin Laden’s diaries contain the rather startling conclusion that he didn’t think Vice President Joe Biden was worth bumping off (hat tip: a tweet from my New York colleague Jon Swaine).

According to ProPublica, the Obama administration is briefing that Barack Obama was bin Laden’s the “top target” (no surprise there) while “military chiefs like the chairman of the Joint Chiefs of Staff, the defense secretary” were also major scalps.

But Joe Biden’s scalp (hair plugs and all)? Apparently, not so much. A counterterrorism official said: “There is a note indicating that the vice president is not an important target because that position has less weight.”