President Obama and Democrats may be correct when they claim oil and gas production are up in the U.S.A. It is very hypocritical of them to imply they deserve any credit. The opposite is actually true. President Obama and his democratic administration have been thwarting new drilling permits. Oil and natural gas production actually declined on Federal Land in 2011. The increase was on private and State controlled land.

From IER via CFP: 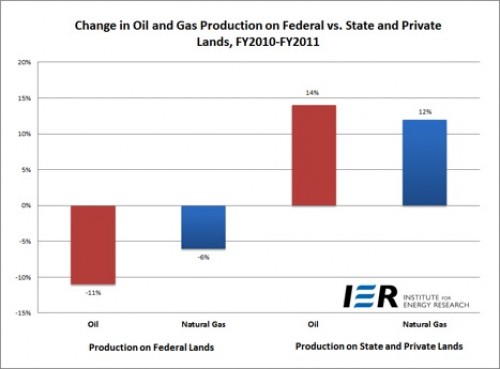 Sources: Department of the Interior, Office of Natural Resources Revenue, and onrr.gov
Posted by Bluegrass Pundit at 8:21:00 AM

LIBs need to keep people dumb and dependent. Obama lies to them, they lap it up eagerly, then they run around the blogosphere regurgitating the lies, and others lap them up and do the same.

Truth has NO PLACE in the 2012 Democrat/LIBeral/socialist/anarchist/communist movement. They are Alinskyites, where the "ends" (socialism) justify the means...lie, lie, lie, steal, steal, steal. Old Saul would be proud of what this party is today.

Obama is a liar to his core and, like most LIBs, will say anything at any given moment. He has been a WET BLANKET on the economy, if not an outright wrecking ball. He TARGETS his "enemies" and in the process wrecks the economy. LIBs are childish like this. They don't get that one thing leads to another. They think that things happen in a vaccuum and that they can do whatever they want without any "repercussions" whatsoever. Then when the repercussions inevitably come, all these David Axelrod clones/drones can mutter is that it's "someone's else's fault! Didn't you see all of my good intentions???"

What a joke. The Dumbos have gone straight down the toilet in the last 15 years or so as the sick left continues to drive us off that "cliff" they said Bush was driving us off of. They've taken us OVER it. When do we hit bottom? It's coming if this guy stays in office.