Since the Volt isn't selling, GE is going to buy them all 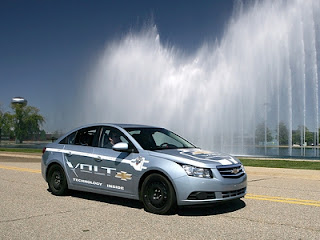 Since the Volt isn't selling, GM is going to buy them all . GE is ordering all employees to drive a Volt.


(Gas2)- General Motors and General Electric are two companies that have been in the political crosshairs lately. GM stands accused of “crony capitalism,” while GE is under fire for paying no Federal income taxes in 2010. The two companies share more than that though, with GE placing an order for 12,000 Chevy Volts and other hybrid vehicles.

A memo leaked to Green Car Reports lays out GE’s plans for their new fleet of Volts, and as expected, it has some people crying foul.

The memo, sent to employees of GE Healthcare Americas team explains that all sedan, crossover, and minivan purchases in 2012 will be replaced by the Chevy Volt. Only field engineers are excepted from having to drive a company Volt.

GE will offer estimates for installation Level 2 Charging Stations, though all-gas use will be allowed when there is no electric option. Any employees who opt out of the Volt program will not be compensated for their expenses. Those who do choose to drive the Volt will be reimbursed for public charging and home charging costs, in addition to gas uses.

While some people are probably put off by having to drive a Volt, GE claims to have crunched the numbers and believes that in the long term, this will save the multi-national company big bucks. More than that though, GE is positioning itself as a big player in the EV charging market. Getting employees into Volts also means getting charging stations into homes.