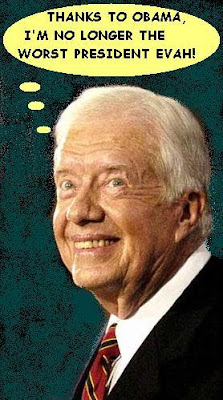 
ATLANTA (AP) — Former President Jimmy Carter said on Wednesday that Occupy organizers have created a “relatively successful” movement because they focused national discussion on wealth disparity despite lacking leadership and a unifying set of goals.

The Georgia Democrat said at an event in Atlanta that Occupy organizers have succeeded in forcing the media and Congress to realize the “chasm is getting greater than leaps and bounds” between the rich and the poor.

“It’s been relatively successful even acknowledging there’s no leadership, there’s no coherence and there’s no single list of issues they want to succeed,” the former president said of the movement started late last year in lower Manhattan to decry corporate influence in government and wealth inequality.

“That issue was basically ignored by the Congress and the news media a year ago,” he said. “I believe they’ve achieved putting that back on the agenda.”