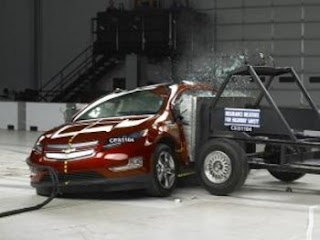 29% is about the percent of left-wing environ-whackos in this country.


President Obama in his latest budget has proposed $10,000 subsidies to encourage the purchase of electric cars with his goal of having one million of the vehicles on the road by 2015. But voters by a two-to-one margin oppose taxpayer-funded subsidies for this purpose.

Just 29% of Likely U.S. Voters favor $10,000 government subsidies to encourage the purchase of electric cars, according to the latest Rasmussen Reports national telephone survey. Fifty-eight percent (58%) are opposed to such subsidies. Thirteen percent (13%) are undecided.

The people who do get the $10,000 subsidy would be wise to increase their fire insurance.
Posted by Bluegrass Pundit at 7:14:00 PM