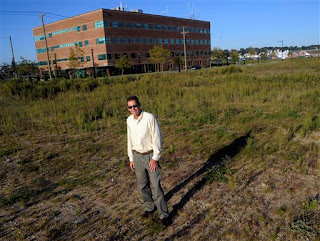 In 2005, the United States Supreme Court ruled 5-4 in the case of Kelo v. City of New London. The shameful ruling allowed local governments to seize your property for private development. Suzette Kelo lost the case and was paid $442,000 for her house. The developer, The Corcoran Jennison Cos, ran out of money and the project was abandoned. The proposed development is now a vacant lot.


NEW LONDON, Conn. (AP) - Weeds, glass, bricks, pieces of pipe and shingle splinters have replaced the knot of aging homes at the site of the nation's most notorious eminent domain project.

There are a few signs of life: Feral cats glare at visitors from a miniature jungle of Queen Anne's lace, thistle and goldenrod. Gulls swoop between the lot's towering trees and the adjacent sewage treatment plant.

But what of the promised building boom that was supposed to come wrapped and ribboned with up to 3,169 new jobs and $1.2 million a year in tax revenues? They are noticeably missing.

Proponents of the ambitious plan blame the sour economy. Opponents call it a "poetic justice."

"They are getting what they deserve. They are going to get nothing," said Susette Kelo, the lead plaintiff in the landmark property rights case. "I don't think this is what the United States Supreme Court justices had in mind when they made this decision."

Kelo's iconic pink home sat for more than a century on that currently empty lot, just steps away from Connecticut's quaint but economically distressed Long Island Sound waterfront. Shortly after she moved in, in 1997, her house became ground zero in the nation's best-known land rights catfight.

Kelo and six other homeowners fought for years, all the way to the U.S. Supreme Court. In 2005, justices voted 5-4 against them, giving cities across the country the right to use eminent domain to take property for private development. Keep on reading...

Shameful ruling indeed! I am still disgusted by this... no respect for private property rights whatsoever!!!