Don't anyone tell the food Nazi 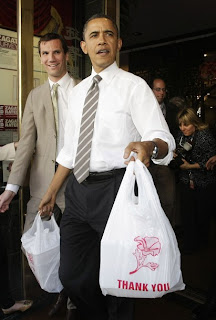 President Obama made an unscheduled campaign stop for Chinese takeout...


SAN FRANCISCO — President Obama made an unscheduled stop for Chinese takeout between campaign fundraisers today, causing something of a commotion in Chinatown here.

With some time to spare between events, his motorcade wound its way to Great Eastern restaurant, where surprised diners jumped up from their tables and shrieked “Obama! Obama!” according to a pool report.

The president spent a few minutes working the room, greeting people and taking pictures. “How are you? Good to see you!” he said repeatedly, the pool report said.

He also spent time shaking hands outside, before leaving with two large bags of food. An aide said Obama got some dim sum.

Well, obviously the people in that restaurant need to see a psychiatrist and have their heads read for even giving the Hitler clone recognition.