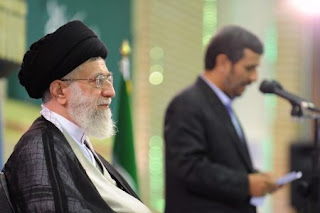 Iranian President Mahmoud Ahmadinejad won his election due to vote rigging by the Revolutionary Guards and the volunteer Basij militia.


(Telegraph) — Iran’s Supreme Leader has called on the Revolutionary Guards to ensure that his supporters emerge triumphant in this week’s parliamentary elections, according to opposition sources.

At a meeting called last week by Ayatollah Ali Khamenei, the Supreme Leader of Iran’s Islamic Revolution, the leaders of the Revolutionary Guards and the volunteer Basij militia were urged to use the same tactics employed during the controversial 2009 presidential election contest.

On that occasion widespread vote-rigging led to Iranian President Mahmoud Ahmadinejad being elected to serve a second four year term, a result that produced nationwide anti-government protests.
Mr Khamenei has since fallen out with Mr Ahmadinejad in a bitter dispute over the future role of the presidency in Iranian politics.

As a consequence Mr Khamenei is now urging the Revolutionary Guards to ensure his Conservative Front wins the majority of seats in Friday’s parliamentary seats at the expense of Mr Ahmadinejad’s supporters.