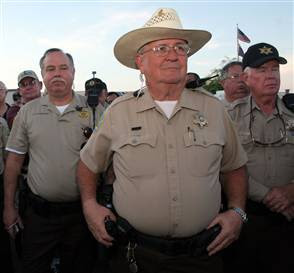 Arizona Sheriff Joe Arpaio is hinting he has something interesting. Time will tell.


Arizona Sheriff Joe Arpaio will reveal the findings of his office's investigation into the authenticity of President Obama's birth certificate on March 1, he announced Tuesday.

"Once again I take my elected sheriff's status very serious and when the people ask me to do something, I try to do it regardless of the repercussions, the politics," Arpaio said Tuesday at the Maricopa County Republican Party Lincoln Day Lunch and Straw Poll. "So on March 1st I will have a press conference and reveal what we found out during that investigation. And I don't have press conferences just to have my name on television."

Although I am hopeful Joe will have "something", I'm not holding my breath.

We have been let down at every turn so far.

If he has ANYTHING, it will probably be something small, and NOT Earth shattering.