Monday is the 50th anniversary of John Glenn's orbital flight 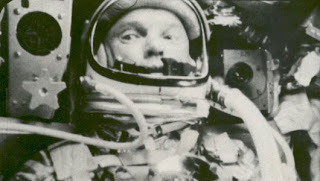 50 years ago, the U.S. was preparing to launch John Glenn for his orbital flight. Veterans of NASA’s Project Mercury reunited Saturday to celebrate the milestone. Sadly, on the 50th anniversary of this historic milestone, the U.S. can't launch an astronaut to space at all.


WaPo: [...] Earlier in the afternoon, the Mercury brigade traveled by bus to Launch Complex 14. That’s the pad from which Glenn rocketed away on Feb. 20, 1962.

Some retirees were in wheelchairs, while others used walkers or canes. Most walked, some more surely than others. But they all beamed with pride as they took pictures of the abandoned pad and of each other, and went into the blockhouse to see the old Mercury photos on display and to reminisce.

As retired engineer Norm Beckel Jr. rode to the pad Saturday, he recalled being seated in the blockhouse right beside Scott Carpenter as the astronaut called out to Glenn right before liftoff, “Godspeed John Glenn.”

But there’s more to the story.

“Before he said that, he said, ‘Remember, John, this was built by the low bidder,’” Beckel, 81, told The Associated Press. Keep on reading...