President Obama is touting an increase in oil production as one of his accomplishments. Here is the chart and info from barackobama.com. (accent is mine)


Since taking office, President Obama has called for an “all-of-the-above” approach to reducing America’s dependence on foreign oil, including an increase in safe and responsible oil production here at home.

Today, America’s oil production is at its highest level in eight years: 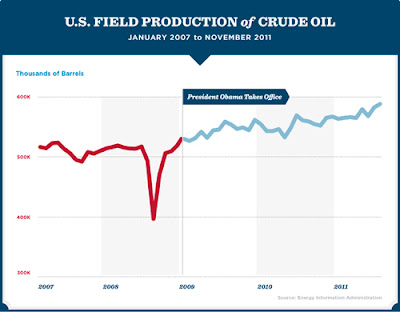 The truth is there has been a 69 percent reduction in the number of offshore drilling plans approved under President Obama. It also takes 52% longer for the lucky few to get a permit approved.

Charts via Institute for Energy Research.
Posted by Bluegrass Pundit at 8:38:00 PM